Modified Business Hours: As of March 23, El Pomar offices are closed with staff working remotely, weekdays from 9am-4pm. Penrose House Conference Center, Penrose Heritage Museum and Will Rogers Shrine of the Sun are closed to all external guests and groups until May 4th.

Fellowship alumni are leaders in the public, private and nonprofit sectors in Colorado and across the country. Alumni help current Fellows by serving as mentors, discussing potential career opportunities and offering insight on how to succeed at El Pomar and beyond. Alumni also remain connected and continue to take advantage of the network after completing the Fellowship and throughout their careers.

Patrice is the Executive Director and CEO at REACH Pikes Peak. A Colorado Springs native, Patrice graduated from Chardon State College in Nebraska. She later served as Events Manager for the Association for Christian Retail, known as Christian Booksellers Association, who hosts the largest Christian product convention in the U.S. welcoming over 3,000 attendees yearly. Patrice also served at the Boys & Girls Clubs of Pueblo County as Director of Development where she implemented and led the organization’s first annual giving campaign strategy, creating $35,000 in individual and corporate giving.

David Coffey is the Executive Director of Recovery Café. He has guided Recovery Cafe’s programming with the Founders, Killian Noe and Ruby Takushi, for over 12 years. David also serves as the Co-Chair of the Seattle Human Service Provider/Seattle Police Department West Precinct Forum, on the Mirabella Foundation Board, on the Fundraising committee of the Food Bank at St. Mary’s, and is the Secretary of the Board of the Washington Recovery Alliance. David is passionate about finding better solutions than incarcerating people for behavioral health disorders.

Hannah Staller is a graduate student at Vanderbilt University studying Leadership and Organizational Performance. She is passionate about maximizing the potential of people and organizations through learning, leadership development and coaching. Hannah has four years of experience in the nonprofit sector. After leaving the Fellowship in 2016, she served as the Volunteer and Special Events Manager at United Way of Treasure Valley in Boise, Idaho. Hannah led a variety of community-wide events and volunteer programs, while also fundraising and managing a statewide volunteer website. Looking forward, Hannah is excited to pursue opportunities in consulting, learning and leadership development. 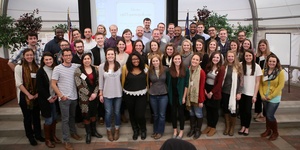 Alumni move to a diverse range of fields after the Fellowship. Alumni have worked at: