Rev. Dr. Milton E. Proby (1929-2005) was one of the first civil rights leaders to have profound influence in the campaign for equality in southern Colorado. Reverend Dr. Proby dedicated his life to uplifting racial relations and serving the needs of the poor in Colorado Springs. As senior pastor of St. John’s Baptist Church from 1958 until his death in May 2005, Rev. Dr. Proby was a powerful and positive influence in southern Colorado. Inspired by the words of his friend Dr. Martin Luther King, Jr., Rev. Dr. Proby worked diligently to bring the dream, “that we will be able to transform the jangling discords of our nation into a beautiful symphony of brotherhood,” to reality. 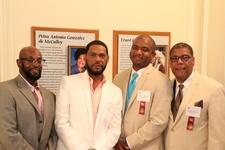 Nominations for the 2023 Hispanic/Latino Milton E. Proby Inductee are due May 5, 2023. Please click below for the nomination application.

The 2022 induction ceremony honored and memorialized the contributions of a member from the African American community – Dr. Kenneth Stephen Burnley. Watch the video and learn more about the impact Dr. Burnley had during his 13-year tenure as Superintendent of Colorado Springs School District 11.