Women in sports: something to celebrate 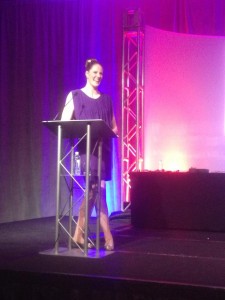 On Sunday night, sitting a mere 10 feet from arguably the best swimmer in the world, I wasn’t struck by Missy Franklin’s fame or the glare of all those Olympic gold medals. I was struck by her passion, excitement, joy and patience. Prior to the annual Sportswomen of Colorado awards ceremony, where Franklin was slated to receive the organization’s highest honor as Sportswoman of the Year, she faced a familiar situation. A crowd of star-struck young girls surrounded her, eager and unsure at the same time. Franklin’s interactions with these girls was both comforting and empowering.  Role models help to make sense of uncharted waters and give those that follow them the courage to pursue their dreams; the importance of having female role models cannot be overstated.  Missy Franklin is one of those role models and organizations like Sportswomen of Colorado help showcase that spirit to the state and the world.

2012 marked the 50th anniversary of Title IX, the civil rights act that prohibited sex discrimination in education, and oh, how far we have come. Considering the challenges and adversity female athletes experience, the network and community developed specifically for sportswomen in Colorado is truly unique. Sportswomen of Colorado (founded in 1974 by the YWCA of Metropolitan Denver) is the first nonprofit organization in the state that recognizes female athletes and individuals that have helped advance women’s sports endeavors.  The organization is also committed to providing scholarship for girls to attend athletic camps across Colorado, making athletic success accessible to all.

The backgrounds and accomplishments of the women honored during the ceremony varied, yet each story was remarkable.  Female athletes often disappear into the shadows of their male counterparts, however this event shed light on these athletes’ many athletic accomplishments and individual victories. Their accomplishments extend beyond the world of sports and can be found in the classroom, the business world, and the community. Their athleticism was admirable and inspiring, but it was each woman’s spirit and the energy in the room that was truly captivating. The night was an opportunity to honor those that have accomplished incredible things and encourage future generations to find their strength.

The Swede Johnson spirit award winner “Sweat, Love and Gears,” completed “A Race across America,” a bike race that is 30 percent longer than the Tour de France and asks riders to gain over 100,000 feet of elevation.  The women have also started a nonprofit designed to encourage endurance biking as an avenue to achieve excellent health.