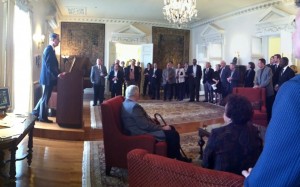 El Pomar Trustee Emeritus Brenda Smith said she would always remember the love Olin showed his wife Marilyn, who passed away in 2008. “Kent always made sure tasks were easier for Marilyn as they got into their later years,” Smith noted. “ I remember going to breakfast with them and Kent always asked the waiter for a paper cup for Marilyn. She began to have very bad arthritis in her hands around that time, and holding ceramic coffer cups was painful for her. Their love was once in a lifetime.”

El Pomar President and Trustee R. Thayer Tutt, Jr. noted Olin was the last legacy trustee, having worked as CEO for the First National Bank of Colorado Springs: the bank that El Pomar Foundation Founder Spencer Penrose originally held foundation assets. “Kent was a dear friend of my father and a role model for me,” Tutt said. “He will be missed dearly.”