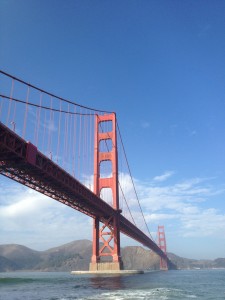 "Good luck with your interview.” "You too, man, nice to meet you.” Those were the last words I exchanged with a complete stranger on a subway car jolting from the San Francisco International Airport to the heart of city.  He was on his way to an interview at UC-Berkley as a potential candidate for a PhD program in microbiology.  The next day, he and fourteen other candidates were slated for a series of interviews followed by a casual dinner with the department professors.

His name was Nick – a young Colorado native in his early twenties from Carbondale pursuing his passion to study microbiology.  He recently graduated from a small college in Maine and previously attended Colorado College in 2007; one year before I arrived at CC.

On Tuesday morning, the day before I met Nick, I woke up from a long holiday weekend of skiing and celebrating the life and accomplishments of Rev. Dr. Martin Luther King.  I assumed I had a pretty good idea of what my day would look like returning to the office. However, to my surprise, with this Tuesday came an unexpected phone interview in the late afternoon and a quick scramble to pack my suitcase and purchase a plane ticket from Denver to San Francisco for a final in-person interview in San Francisco the following morning.  I applied for a position with the Israel Economic Mission to the West Coast, working to strengthen the trade relationship between the west coast and Israel with a particular emphasis on Silicon Valley.

After Nick and I were silenced by the noise on the train, I peered out of the window into the city and tried to envision what life would be like in a place so different from Colorado.  At the end of my four-day trip, I realized that Colorado is my home; many things about the state encourage me to remain in the Rocky Mountains.  The job interview, trip, and experience were all necessary for me to realize I know exactly where I belong at this juncture in my young professional life.

As Nick stepped off the train and shook my hand to say "good luck,” I thought there must be hundreds of people having similar encounters each day.  Two complete stranger’s paths crossing fleetingly as they pursue graduate school, the next potential job, or their life passion to do something great.  I know that this is not the last time I will meet someone interesting while pursuing an exciting new possibility, and for that I am grateful for the opportunities afforded to me through my time at Colorado College and El Pomar Foundation.