Tessie, the Empress of Arkansas 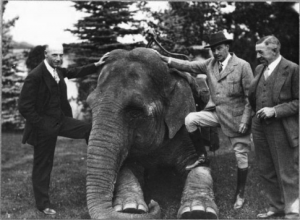 El Pomar founder Spencer Penrose left his mark in Colorado by establishing key landmarks such as The Broadmoor, the Pikes Peak Highway, and the Cheyenne Mountain Zoo. Less known about Mr. Penrose today is his notorious sense of humor.

Spencer’s love for animals was extraordinary, as was his fondness for extravagant collections.   The interplay of these two passions eventually culminated in the founding of the Cheyenne Mountain zoo in 1938, but the menagerie that formed the basis of the new institution had its original home at the Broadmoor Hotel.  Even as guests flocked to the lavish new Broadmoor hotel, called the “Grand Dame of the Rockies,” Penrose began to fill the hotel with flocks of other kinds.  To the disdain of the guests, coyotes, seals, and even flamingos were regulars throughout the hotel grounds.  Only after a boy suffered an unfortunate monkey bite at the hotel did Penrose decide that he needed a more suitable home for his ever expanding exotic collection.  On August 19, 1938 Spencer announced that he would be building the Cheyenne Mountain Zoo as a gift to Colorado and as a way for his cherished animals to be cared for after his death.

Mr. Penrose, now set on opening a zoo, spared no expense collecting deer, bobcats, mountain lions, seals, badgers, coyotes, pheasants, eagles, a monkey, a camel and even buffalo from Yellowstone Park. But Spencer needed a crown jewel for his new endeavor; Spencer Penrose needed an elephant.  Luckily, travelling in India around that time, his host, Rajah Nagapur, presented him with just the elephant he sought.

Supposedly, after a long and arduous voyage back to the United States, his newest acquisition, “Tessie” was ready for her introduction to the world.  Penrose sent press releases far and wide welcoming “The Empress of India. The Largest Elephant in the world.  Gift of the Rajah Nagapur of India.”  Any who doubted the veracity of his fanciful tale of far eastern adventure need ask no further than Tessie’s inseparable East Indian elephant tender, who spoke no English and did not leave the elephant even to sleep.  Tessie quickly became Spencer’s favorite pet and the talk of the town. She joined him as a golf caddie on the course and during the Colorado Springs Shrine parade.

But perhaps the “Empress of Arkansas” would have been a more fitting name for the great elephant.  The 45-year old female elephant came from an Arkansas circus company. Spencer wasn’t one to let a minor detail like that stand in the way of promoting Tessie as the latest, greatest and most exotic animal in his new zoo.

Spencer had a flair for the extravagant and learned to harness his practical jokes to benefit and publicize Colorado to the world. His prank about Tessie’s origins not only amused and inspired the imagination of thousands of Broadmoor visitors, but also helped to create one of the top ranked Zoos in the United States. So for the lasting benefit that a yarn about the “Empress of India” created, we say thank you to Spencer Penrose and his great sense of humor.