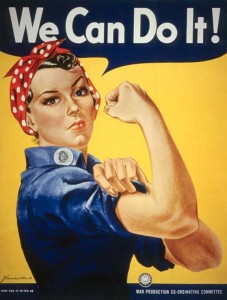 Fortune 500 recently reported there are more female CEOs in this country than ever before. Of the 500 largest corporations in the U.S., female executives run 18, an increase from 12 companies in 2011.  However, while women are assuming more leadership positions, there is still a deficit of strong and prominent female leaders. Leanne Meyer, founder of Unfolding Seasons and guest speaker at the Strong Women, Strong Voices leadership conference, argues that there are several hindering factors, which she collectively calls a “sticky floor,” that have inhibited women from reaching their full potential as leaders.

The “sticky floor” encompasses a number of things: the lack of female role models; an absence of formal and informal networks; the competing needs of appearing competent while remaining well-liked; the non-linear career path many women take; and the difficult dilemma of whether to have kids or take a larger leadership role. But the stickiest issue of all, according to Meyer, is that women too often view themselves – and are perceived by others as – excellent worker bees but rarely as valuable strategic resources.

Meyer explained that when women are asked to describe themselves, they often describe their job, their roles, or things that they do. Men, on the other hand, typically talk about their passions and interests. I, for example, typically describe myself as a daughter, a sister, an El Pomar fellow, and a young woman. Ask a man and he might tell you that he loves fishing, watching documentary films, and eating Italian food.

Rather than dwell on the reasons why we envision ourselves as “do-ers,” Meyer suggests that we think about why we assume the roles that we do. Our identities are not solely based upon our ability to do things, but rather our interests and motivation for pursuing certain endeavors or roles. If we bring more of who we are and less of what we do to the workplace, we can demonstrate our ability to be strong strategic leaders. We are seen as individuals who can think critically and creatively when we share more of who we are.

While at the conference, participants also had the opportunity to sit down with one another and network in a more personal way. Rather than discussing previous life accomplishments or attempting to solicit a job, we shared personal life stories and our hopes and dreams for the future.

As a young woman entering the competitive labor market, the Strong Women, Strong Stories provided me with an opportunity to reflect on the process of developing strong leadership skills. The conference certainly advanced the argument that leaders are made. But perhaps more importantly, it highlighted one key point: leadership development is contingent on the development of, and confidence in one’s own identity.

Without strong stories, there are no strong leaders, and often the strongest stories have the stickiest floors.