What does an independent community actually look like in America today? The importance of relevant and sound local government is more important than ever. Self-governance has always been the core value of the American political system, and no community is testing its limits quite like Colorado Springs.

Recognizing this, El Pomar’s Forum for Civic Advancement has undergone an exciting rebirth in the past few months. Forum events for the 2010-11 season aim to attract the current and future leaders of the city, and expose them to cutting-edge ideas that spark further exploration. Two such events kicked off the season—a conversation about the future of the Springs that drew unprecedented interest, and the first meeting of the new Civic Advancement Seminar. 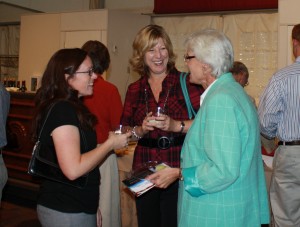 The inaugural Civic Advancement Seminar, with the facilitation of of Dr. Joseph Postell, explored what self-government in Colorado Springs actually means. An assistant professor of political science at UCCS, Dr. Postell’s background in American political philosophy enabled him to oversee a highly theoretical conversation on the rights and responsibilities of local government with ten young civic leaders.

The Civic Advancement Seminar is a new program that brings together leading young professionals to explore effective civic engagement through a cross-sector lens. As the five-part monthly seminar series continues, theory will play less of a role as the moderators begin to focus on more specific problems and practical solutions. However, beginning the series with this theoretical roadmap ensured that the seminar participants have a shared background from which to tackle the core tensions and dilemmas inherent within governance.

Seminar participants quickly identified a key tension in Colorado Springs governance: quality government services and low taxes. Beyond this point, however, opinions differed. Some participants discussed how the loss of community centers and streetlights affected their lives, while others praised the resilience and effectiveness of the private sector. Dr. Postell’s moderating style allowed the group to quickly overcome these differences and reach at least one consensus—each community ought to govern in a way that best suits its needs.

Yet understanding community in a suburban age presented a new set of challenges to the participants. Some noted that the very communities they grew up in had been radically changed and diluted by suburban sprawl. They lamented the lack of community-wide celebrations and public spaces available to everyone. Others questioned if geography is still the most effective way to measure community in a digital world. When the conversation turned to government, egalitarian concerns quickly surfaced; how can less wealthy communities afford the services they need the most?

Taking the Springs to the Wild Blue Yonder 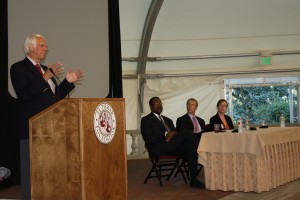 The future of Colorado Springs, however, is a topic that interests an even broader audience. The Forum’s September event drew 200 citizens keen on discussing the question: where do we go from here?

Setting the stage was Daniel Kemmis, former mayor of Missoula, Montana and author of “Community and the Politics of Place.” While the east coast could supply plenty of experts willing to critique Colorado Springs, Kemmis was himself a westerner. He knew better than most the issues that affect Colorado’s local economies.

Yet it was not economics that Kemmis highlighted. “Difficult economic times,” he said, “give us an opportunity to think about what we really mean by ‘prosperity.”

Kemmis spoke lovingly of his hometown of Missoula, of its relatively recent growth into a beautiful and thriving city, and the “livability” of its downtown area. Its growth was fueled by active citizens who wanted to utilize the city’s strengths. Colorado Springs has strengths too, Kemmis observed—but perhaps not all of them are being utilized.

What would it take to help Colorado Springs to the next level? Kemmis didn’t presume to know—he only presented a picture of the components that make up a thriving city. The audience then joined a panel of Colorado Springs respondents—Phil Lane of Operation 6035, Eric Drummond of Manitou Springs, and Bettina Swigger of COPPeR—in a lively conversation about how to build with those components. 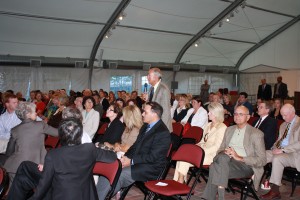 On the one hand, the Kemmis-led event, like the first Civic Advancement Seminar, was only a conversation. As columnist Barry Noreen—a Missoula native himself—noted, “There’s no better evidence a city has lost a sense of itself than when meetings are held to rediscover the mojo.” But on the other hand, when 200 people in a community would rather talk about fixing their city than go home after work, perhaps that is an important sign.