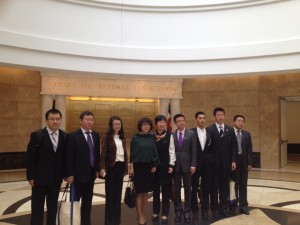 “One, two, three – qiézi!” Shoulder to shoulder with rising Chinese political leaders outside Denver’s new Supreme Court Building, El Pomar Foundation staff discovered yet another point of connection with their foreign guests. Apparently, the practice of shouting a food item that forces the speaker to smile while taking photos crosses cultural boundaries – “cheese” in English, and “qiézi,” or eggplant, in Mandarin.

In late September, nine political and policy professionals from China took part in the American Council of Young Political Leaders (ACYPL) program to study American governance and society. The Chinese delegation finished their two-week visit in Denver and Colorado Springs, where they engaged with state and community leaders. Over the delegation’s four days in Colorado, an exchange of ideas arose between delegates and Foundation staff as the group met with government officials, media representatives, campaign officers, and yes, took silly pictures.
Delegates gained perspective on political leadership during discussions with Colorado Attorney General John Suthers, Denver Director of Human Rights and Community Relations Derek Okubo, and Colorado Springs City Councilor Jan Martin. Delegates also witnessed the democratic process first-hand while sitting in on a lively El Paso County Commissioners meeting. The delegates were particularly surprised when Commissioner Peggy Littleton explained a resident could live in unincorporated El Paso County and not belong to any city.

Looking back on the experience, the head of the delegation and Vice-Secretary General of the All-China Youth Federation, Ms. Liu Aiping, stated,

“The visit to Colorado, the last destination of the Chinese Youth delegation, deeply impressed me. The schedule was comprehensive and specific, which not only corresponded to the overall goal of this visit, but also included deep dialogues and exchanges according to the background of visiting members and our concerns. It was very fruitful and rewarding.” 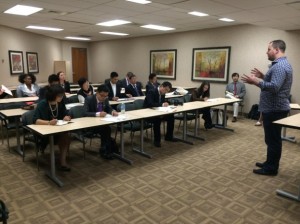 “I was greatly impressed by the rich and comprehensive program, the rich dialogues and discussions, as well as the dedication and enthusiasm of the El Pomar staff members. I believe the trip will benefit us all significantly for the rest of our lives.”

El Pomar Foundation staff members who were able to work on the ACYPL-China program gained as much from the experience as the delegates themselves. El Pomar Fellow and program director, Zoe Goodman, reflected,

“I really enjoyed the time with the delegates between meetings, at meals, and walking around. I have learned so much about America, in addition to China, seeing the US through the eyes of another. It's a privilege to have been able to spend a week with the delegates.”