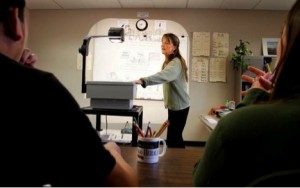 Yet for those dropouts who wish to pursue a better life, the barriers to obtaining a General Educational Development (GED) degree often seem insurmountable. Language, poverty, pregnancy, illness, technology, and incarceration can dull hopes for a brighter future.

In the far Southwest corner of the state, the Durango Adult Education Center has been working for 25 years to reduce barriers for those hoping to get ahead. No matter the reason they didn’t complete high school, the DAEC helps young people and adults achieve their educational dreams.

These dreams take many forms. A 2011 Durango Herald article highlighted the story of one former student, Krystal, whose life has been transformed by the DAEC.

After dropping out of high school at 14 to take care of her mother, Krystal came to the center to get her GED diploma. After completing her degree at 16, Krystal enrolled in Southwest Colorado Community College, where she was able to continue on a path to her ultimate goal: a doctorate in psychology.

It is because of DAEC’s ability to transform the lives of its students that El Pomar’s Southwest Regional Council supported the Center with two $10,000 grants in 2011 and 2012. The grants were used to fund general operations support for DAEC’s educational programming in Southwest Colorado.

Today, DAEC is gearing up to address a new barrier for its students: in 2014 the GED will convert to a computer-based version for the first time.  For DAEC’s students, many of whom have no experience with computers, this change will pose yet another barrier to educational attainment. But overcoming barriers is what the DAEC is all about.