Our Piece of America’s Garden: Olmstead, sculpting the nation 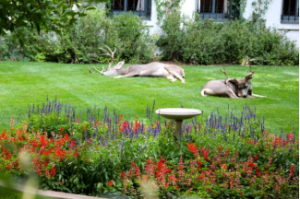 Walk into the courtyard of El Pomar’s Penrose House on a summer day, and you see hummingbirds and sphinx moths hovering among roses and petunias, framed by trellises of silverlace. You can sit on the red tiles under the portico and listen to water bubbling from three gentle fountains. By fall, the palette has changed to amber and burgundy, with herds of deer and geese grazing in the front orchard or napping on the terraced back lawn. Come winter, the bucks spar in the snow by the columned teahouse, overlooked by a bronze statue of Spencer Penrose, and behind him the Shrine of the Sun on Cheyenne Mountain.

The sculpted grounds blend serenely into the wild mountain atmosphere, adding graceful symmetry to nature. In them, the handiwork of America’s most esteemed landscape architects is visible, The Olmsted Brothers of Brookline, Massachusetts. The firm, begun by Fredrick Law Olmsted, Sr. and continued by his sons, was responsible for designing New York’s Central Park, the Chicago World’s Fair grounds, and the National Mall park system. By 1916, when the Olmsted brothers were commissioned to design the grounds of the Broadmoor Hotel and El Pomar, their already glowing reputation was destined only to expand.

Fredrick Law Olmsted was born in Hartford, Connecticut in 1822. He began his career as a sailor and journalist with the New York Times, writing most notably about public gardens in England, and the ills of American slavery in the 1850’s. He first came to landscape architecture after winning the 1857 competition for the design of New York’s Central Park as a greenhorn partner to renowned English architect Calvert Vaux. He adopted his son and successor John Olmsted when he married his brother’s widow in 1859, and had his son Fredrick Law Olmsted Jr., who would also inherit his career, in 1870. 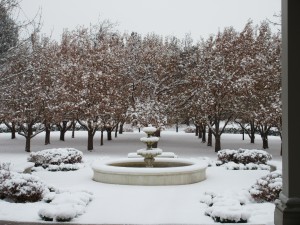 Although an established journalist, Olmsted Sr. found his calling in landscape architecture, and was greatly influential in the creation of Yosemite Valley as the first designated preserve land in the U.S. He passed his spark onto his sons through mentorship and collaboration. All three worked together on the 1893 Chicago World’s Fair. Although Olmsted Sr. died in 1903, his sons continued successfully building American landscapes through his firm until their deaths. John Olmsted died in 1920, and Fredrick Jr. passed away in 1957.

The Olmsteds set the standard for America’s urban parks and wild places. Even as the Penrose House grounds were under construction, Fredrick Law Olmsted, Jr.’s influence and conservation ideals were being forged into the basis of the National Park Service in 1916. His philosophy of using lands conscientiously for the enjoyment of people today and generations yet to come persists in the creed of the modern Park Service, and is as relevant as ever. His family’s ethic for creating human spaces in harmony with the landscape remains apparent in Penrose House’s elegant grounds. 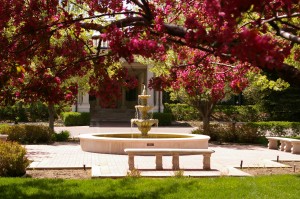 Sitting under the cool portico by the summer fountains, the color dappled grounds of Penrose House provide not only a glimpse into the aesthetic soul of a burgeoning nation, but a suitable analogy for the lasting legacy that Spencer and Julie Penrose ensured through El Pomar Foundation. Just as the Olmsteds left beauty in their wake, the Penrose’s endeavors beautify Colorado Springs to this day, and their invested fortune provides for the benefit of Coloradans now and into the future. The Olmsteds, ever designing for future generations, would be pleased to know that their handiwork at Penrose House is still inspiring legions of nonprofit and social leaders who use the conference facility free of charge each year. The eternal harmony of the grounds is a splendid reminder of the El Pomar mission, to serve the people of Colorado, even those we don’t know yet.

We welcome interested readers to visit the Penrose House grounds at 1661 Mesa Ave. in Colorado Springs anytime during our regular operating hours, 9:00am-5:00pm, Monday through Friday.