Movie theaters have been a gathering place for Americans for over a century , and the conversion of Hollywood to digital prints over the last several years has threatened to close 10,000 theaters nationwide.  A digital projector can cost as much as $100,000, a cost few rural theaters can absorb. The loss of a theater is a detriment to the cohesion of the community; theaters serve as an anchor in many small downtowns, drawing people out for an evening to stop in shops, restaurants and other local businesses. 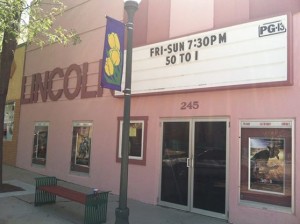 When faced with this looming change, the Lincoln Theater in Limon refused to give up.  Working tirelessly to find a way to fund a projector, the Lincoln County Economic Development Corporation and the community came together to raise enough money to complete the digital conversion. A $5,000 grant from El Pomar Foundation aided the project, and since the completion of the conversion, 7,500 attendees have come to weekly features, documentaries and independent films.  The theater is a true community effort; 35 local businesses have either sponsored or advertised at the theater.

To urban dwellers accustomed to seeing at least one Cineplex on their daily commute, the salvation of a community theater may not seem like much.  To Limon, and 10,000 other communities nationwide, it’s a game changer.