Katharine Joyce Carpenter spent her life battling for the poor, the elderly, and the disadvantaged. On November 14, her legacy was on display as she was inducted into the Milton E. Proby Cultural Heritage Room.

Born in 1921 in Pueblo, Carpenter faced challenges from day one. Her Cherokee and Choctaw background was a marked disadvantage at the time for someone who wanted to effect social change—but it also gave her a perspective that drove her forward. There was a reason her tribal name was WaLaWaLaHa, “The Little Builder.” Carpenter dedicated her life to building a better future for others, and her achievements survive her.

These achievements started with the example she set day by day. Carpenter regularly fed neighborhood children. She found jobs for homeless people. She raised 21 children, including 11 of her own. She hand-sewed over 100 baby blankets for indigent mothers, missed a mortgage payment because she paid for the funeral of a child whose family couldn’t afford one, and marched with Martin Luther King, Jr. in Washington, D.C. Stephen Handen of Mesa Housing said of Carpenter, “She was a feisty, indefatigable soldier for the poor of our community. She was fearless.” Added Sandra Turcotte of the Tecumseh Center, “She taught everyone who asked for her help, without monetary compensation or ever a question of race.”

But one didn’t have to know Carpenter personally to feel the effects of her work. For decades, she was a whirlwind of civic and political activity, and helped found or grow several organizations that are still community mainstays today. She fought for welfare rights, and worked with many civic groups including Head Start, the Hillside Neighborhood Community Center, and El Paso Community College. She founded the Pikes Peak Area Legal Advocates and the Colorado Prison Reform Centers. She helped start the neighborhood health clinic that would become Peak Vista Community Health Centers. She lobbied for the interests of minorities, the poor, and the elderly with the Colorado Springs city council. In 1973, she ran for city council herself, and in 1976 she was elected to the office of Committeewoman of the Democratic Party for Precinct 58, El Paso County.

In 1994, when the city council proposed changes to Garden of the Gods Park to bring in more cars and more tourists, it was Carpenter who led the effort to preserve the magnificent natural beauty of the park, and the history and reputation of the Native American tribes for which it was hallowed space. “Money cannot buy this beauty,” she wrote in a passionate letter to the city council. “It cannot replace the sacred ground and growing things that have been in this beautiful place for centuries. We have to stop and look at our past in order to survive the future.”

Carpenter died the same year, still fighting to leave southern Colorado better than she had found it. Turcotte said of Carpenter, “No matter what people said about her, she just kept going. No matter how hard the issues were to fight, this poverty warrior just kept going. Everything she taught so many advocates and people just keeps going today—she would be proud of the legacy she left when she just had to keep going.”

The Milton E. Proby Room was created in 2006 to pay tribute to Reverend Milton E. Proby’s example of civic involvement and fellowship across cultural boundaries. Each year at least one former ethnic minority community leader is honored with induction into the Proby Room. Members of the media are invited to cover the induction ceremony to be held in the Garden Pavilion at Penrose House. 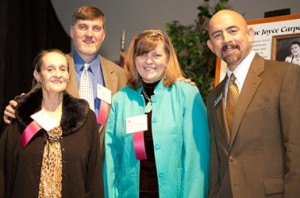