Identity and History Restored to 'Portrait of John Sherba' 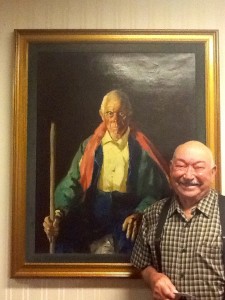 Just after the turn of the 20th century, a young man set out walking the 660 miles from Vienna to Rome. After his sore-footed arrival, he spent two weeks moving grapes on the Roman docks before securing passage on the Carpathia, a ship eventually fated to rescue the survivors of the Titantic in 1912 and sink to a German torpedo during World War I. The man's name was John Sherba, and he was returning to the country of his birth and infancy – the USA.

John's path brought him to Colorado Springs at the start of the Great Depression. He found employment shoveling coal and landscaping at the Broadmoor Hotel, and worked there for the rest of his life. While working at the Broadmoor, he befriended Margaret Tutt, who appreciated his European manners and talked to him almost daily. Years later, at her request, the Broadmoor Hotel commissioned the Broadmoor Academy artist Randall Davey to paint a portrait of John Sherba.

The portrait was completed in 1964, only six months before John passed away. His image hung in the Broadmoor Mezzanine for years, but while his distinguished bearing remained, his name and story were forgotten. By 1989, hanging in an exhibit at the Colorado Springs Fine Arts Center, the painting was known only as "Portrait of an Old Man." The portrait now hangs in El Pomar's offices at the Broadmoor.

In the portrait, an elderly man sits head on with flushed cheeks and a red shawl over his green jacket. He clutches a wooden staff in his right hand and stares directly out with piercing blue eyes. He is illuminated in the painting from his right side and is further emphasized by his contrast to the dark background. His demeanor is discerning, but welcoming.

For some years, the old man's visage remained enigmatic. Recently, however, an unexpected visit restored the story to the art – at the beginning of September this year, Tom Sherba, son of John Sherba, paid a visit to his father's image. Tom was in town to see his brother Paul, who still lives in Colorado Springs. Remembering the painting, he called the Broadmoor and inquired about its whereabouts. Soon after, he arrived at El Pomar with his neice to see his father.

As it turns out, the Sherba family has further history with the Broadmoor and El Pomar. Tom and Paul Sherba both caddied at the Broadmoor Hotel during the summers of their youth – once even hauling bags for Bing Crosby and Bob Hope. Their sister Betty, received a scholarship from El Pomar Foundation in 1949 and graduated from the University of Colorado with honors in mathematics in 1952. Their other surviving sibling, Howard, lives in Boulder, Colorado.

Although Tom has visited the portrait before, most recently in 2006, only now have all the pieces fallen together to reunite John Sherba's name and face. This story represents just one more example of the mutually beneficial relationships that El Pomar Foundation has fostered with so many individuals and groups across generations.