In the final weeks of the interns’ time at El Pomar, we were asked to deliver a presentation at July’s all-staff meeting. We, the interns, took the spirit of excellence to heart and delivered a brief history of Spencer and Julie Penrose’s travels around the world. While many know of the generous Penrose legacy in Colorado and with El Pomar Foundation, few know the stories behind their travels, which were crucial to the Penrose influence on Colorado.

After only a short time at the Foundation, this presentation was not just an exercise in teamwork and perseverance, 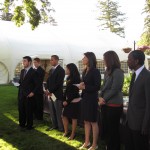 but it was an opportunity that gave us a deeper insight into the life of the Penroses and therefore their legacy in Colorado. After one hears of their grand achievements and contributions, it’s hard to think of Mr. and Mrs. Penrose as ordinary people--but as we conducted our research, fun stories and anecdotes popped up, touristy pictures appeared, and the Penroses became much more human in our eyes. The legacy that surrounds us today is still dauntingly grand, but we as interns can connect the dots by tracing the Penrose travels and international influence back to Colorado—helping us see the relevance of our work and recognize the importance of the work of nonprofits supported by El Pomar.