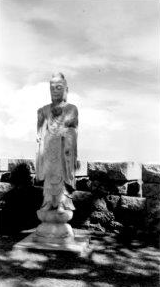 In 1368, the final Mongol emperor of Kublai Khan’s 80-year-old Yuan Dynasty in China fled in the face of a sweeping peasant rebellion.  After nearly twenty years of multi-factional civil war, his retreat and the subsequent ascension to the throne of the former Buddhist monk Zhu Yuanzhang, marked the turn of an era and the beginning of the Ming Dynasty.  The Ming’s 276-year span saw the construction of the Forbidden City in Beijing, the completion of the Great Wall, massive naval expeditions as far abroad as the African coast, and a golden age of art and literature.

In 1938, 300 years after the dissolution of the Ming Dynasty, China was embroiled in the second Sino-Japanese War, a bloody precursor to World War II.  In early spring of that year, across the Pacific Ocean, El Pomar founder Spencer Penrose received a letter from Wan E. Cheng, a business associate in Peiping (Beijing).

Travelling in China three years previously, Penrose purchased a set of Ming Dynasty stone lions, pedestals, and an eight-foot marble Buddha from Cheng.  Now Cheng wrote, “Your Buddha is my friend’s, he had a pair originally.  He has the other, which is as beautiful as yours.  Now, because of the political events, he will sell it too.”

The pair of Ming lions already flanked the courtyard to the recently completed Will Rogers Shrine of the Sun, Penrose’s soon-to-be-tomb, but the monumental Buddha stood asymmetric guard over the tower’s walkway.  Contemplating the offer, Penrose replied in the affirmative, provided that he would receive the matched statue within a reasonable time.

Cheng was able to safely ship the ancient marble from war torn China via San Francisco to Denver in December of 1938.  Broken in transit and seized by Denver customs as improperly imported antique furniture, the statue did not arrive repaired in Colorado Springs until September of 1939.  The statue joined its brother at the Shrine of the Sun just in time – Penrose died and was interred there two months later.

The Buddha statues persisted in their joint guardianship of the Shrine for four decades thereafter, before weathering concerns required their move for the sake of preservation.  Appropriately, they found a temporary home at a Broadmoor Hotel shop named after Marco Polo, the famed emissary of the West to Kublai Khan.  The duo then resided inside the Broadmoor until the renovations at Broadmoor West in 2013 necessitated another relocation. 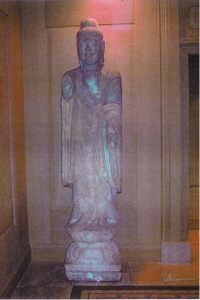 In January of this year, the itinerant sculptures found a fitting final home flanking the portico of the Penrose House Conference Center.  Standing here, they link one of Spencer Penrose’s dying endeavors prominently with his living legacy at El Pomar Foundation.  They embody permanence even in the face of ages.  For El Pomar, hopefully time will reveal such persistence as we continue to benefit the people of Colorado into the distant future.

Today, face to face across the Penrose House doorway, each marble Buddha stands as it always has atop a lotus plinth with a serene expression and one draped arm raised, palm forward.  Although the sculptor could never have anticipated the odyssey that brought the statues from Ming China to modern Colorado Springs, the gesture is oddly appropriate for the conference center venue:  Welcome.