On Wednesday, April 25, eight delegates from Croatia and Romania began their fourth day in Colorado, the third and final leg of their trip to the United States as a part of the American Council of Young Political Leaders program. After a morning spent driving the scenic route to Boulder, touring the Pearl Street Mall, and dining with student leaders from the University of Colorado at The Sink, a local institution that President Obama had visited only a day earlier, the delegates and their El Pomar Foundation entourage traveled to Denver for a meeting with Chris Adams, the president of Engaged Public who is also actively involved with TBD Colorado.

Adams explained TBD Colorado, Governor John Hickenlooper's latest statewide initiative, and gave the Cromanians, as we affectionately began to refer to our group, a chance to test drive the technology he brought to the organization. With the help of Adams’ firm, the initiative makes use of "clickers," wireless remotes with keypads that allow participants to submit their answers to TBD Colorado questions at regional meetings taking place across the state. After a few brief trivia questions about Colorado (this native learned that in fact, the Centennial State has two state songs), Adams began to talk about values.

When hosting regional meetings and conversations throughout Colorado, Adams told the delegates how important it was to get everyone in the room talking about shared values. Values, he told us, provide a common context around which to frame the conversation about the future of our state. To demonstrate the process, he had the Americans, six of them, and the Cromanians, eight of them, individually identify three of their top values. Each individual's words were assembled in a list, keeping the Americans and the delegates separate. Adams then created a wordle for each list to offer a visual.

What was stunning to see was the difference between the values that those of us in a 200+-year old democracy identified and those chosen by the citizens of much younger democracies. 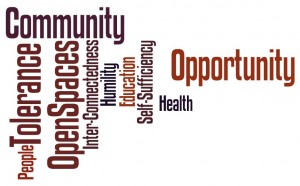 Opportunity. Open spaces. Tolerance. Education.
Those are what the Americans chose. 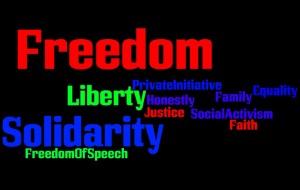 Freedom. Liberty. Solidarity. Equality.
Those are the words the delegates listed.

The results were quite stunning, and reminded us Americans that the things we value now are only possible because of the things valued by those who came before us. Namely, “that these united colonies are, and of right ought to be, free and independent states.”

Founded in 1993, El Pomar Foundation’s ACYPL program partners with the American Council of Young Political Leaders, a Washington, D.C.-based 501(c)(3), to host young emerging political leaders from around the world. To date, the program has hosted 52 delegations from 33 countries to Colorado, and introduced more than 350 international participants to all aspects of state and local government, policymaking, and politics as well as American culture.

Like Stephanie's article? To read more about the differences she has observed between Americans and Europeans, click here.