When El Pomar Foundation initiated the Regional Partnerships program nearly a decade ago, the reason was clear. Reaching rural areas of the state was crucial to Colorado's future and the Foundation needed a reliable method of understanding the needs of diverse and far-flung communities across the state. Convening advisory boards of local leaders just made sense. These were the people who knew what was going on in their own backyards. They already had a demonstrated track-record of getting things done. And they provided firsthand knowledge to the Foundation's trustees who were largely based in the urban areas of Colorado Springs and Denver.

Fast-forward to today. El Pomar is pleased to introduce two new Regional Councils, Pikes Peak (El Paso and Teller counties) and Metro (Adams, Arapahoe, Broomfield, Denver, Douglas, Elbert and Jefferson counties). Two new councils that reside, yes, in our own backyards. With the additions, the Regional Partnerships program now covers all 64 Colorado counties. The two new councils are an example of the program's success more than its growth. While the initial goal was to reach the areas far from the Foundation's home base, the lesson learned revealed that involving knowledgable community leaders anywhere and everywhere can lead to stronger grantmaking far and near.

We invite you to meet the new Pikes Peak and Metro Council members on our web site. Both groups attended the Foundation's recent Statewide Meeting and will begin making grant recommendations next year. 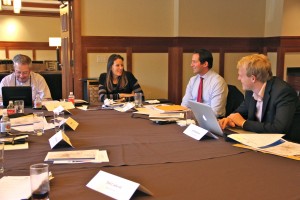