Exhibits, Race Cars, and Records…Oh My 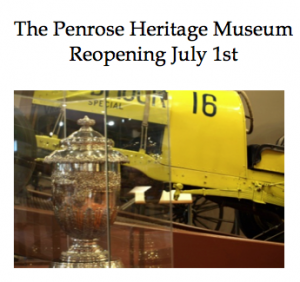 Diversity of Penrose Legacy on Full Display in Weeks Ahead

As the 92nd annual Pikes Peak International Hill Climb rolls around this Sunday, June 29th, the usual excitement will be compounded by two additional events commemorating the Penrose Legacy.

In 1915, the construction of the Pikes Peak highway transformed the landscape of the iconic mountain as well as automobile technology. A considerable feat in engineering itself, the 12.42 mile road to the summit has felt everything from the powerful purr of the record-holding Peugeot T16 (8:13.878) to the less harmonious roar of the Pierce Arrow Broadmoor Special, one of the original winners in 1918. Safety precautions have also improved as speeds catapult towards the 150 kilometers/hour mark (the current record of 145.2 km/h was set in 2013). In 2012 Jeremy Foley survived 13 flips down the jagged mountainside. His automobile, the Mitsubishi Evo, did not share his fortune but the remains of his metallic protector can be seen at The Penrose Heritage Museum.

For those who are less intrigued by the difference between a Model T and Peugeot T16 there is no shortage of engaging historical information at the pair of commemorative exhibits to be opened this week. The Penrose Heritage Museum highlights multiple familial legacies surrounding the “Race to the Clouds.”  For example, four families have had three generations of racers complete the Pikes Peak International Hill Climb—a riskier setting for a family reunion than most. Further, The Pioneers Museum Midas Touch exhibit downtown offers unprecedented insight into the partnership between Spencer Penrose and Charles Tutt, whose influence expands far beyond the race cars and records.

As my internship with El Pomar Foundation passes its one month anniversary, I have continually been amazed by the shear range of Spencer and Julie Penrose’s legacy. Originally, when asked about my job, I blandly recited to peers… “El Pomar contributes to Colorado nonprofits through grant making and programs.” However, as I discover the cultural keystones that the Penroses helped to forge, I continually realize that the roots of the Penrose Legacy are inextricably intertwined with Colorado Springs history.

A quote from Spencer Penrose framed on the wall of the Penrose Heritage Museum reads, “The fact is, one great man opens and prepares the way for many others. Thus, the influence of great men is continually multiplied and increased.” Despite the masculine rhetoric, Penrose was right about how one person’s idea or vision can open the flood gates for a rush of new innovations and improvements. The breadth of Penrose’s legacy, stewarded and enhanced by innumerable people and organizations of the Pikes Peak region and beyond, will be on full display in the coming weeks. Whether it is on the fast-paced, technology-driven roadway on the mountainside itself, or in the newly renovated museum exhibits, we hope to see you there.