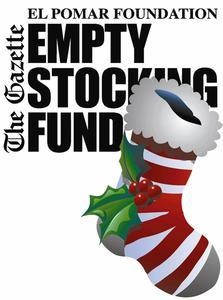 Others need money to provide dental care for people who could never afford it on their own, or rent payments to keep families off Colorado Springs' streets.

Their needs vary - but they all turn to the same place for help.

The Gazette/El Pomar Empty Stocking Fund kicks off its 32nd campaign Thursday with a goal of raising at least $1 million for the ninth consecutive year. All of that money - every penny - will be shared among 20 nonprofits operating across the Pikes Peak region, affecting the lives of countless people.

The goal is ambitious each year, cedes Bill Hybl, chairman and chief executive of the El Pomar Foundation. But it's also necessary.

"These are all organizations that are on the ground, making a difference and contributing to the basic human service welfare of this community," Hybl said.

The campaign barely resembles its humble beginnings in 1984, when The Gazette first began raising money over the holiday season for people whose Christmas wish lists included food, medicine, Christmas presents and money for looming rent and utility bills.

Twenty-seven families were helped that year when the Pikes Peak region raised $45,716, and donated nearly $7,000 in food, clothing, furniture and toys, The Gazette's archives show.

From there, the campaign snowballed into a nearly two-month, million-dollar rush to help people in need.

All told, the campaign has raised nearly $16 million since its inception. By comparison, donations during that first campaign in 1984 totaled less than 5 percent of last season's haul, when donors raised $1,163,087.

More than 2,000 individuals and families pitched in last year, as did many businesses from across the Pikes Peak region.

The money went to myriad causes, all spearheaded by organizations with annual budgets ranging from $300,000 to nearly $72 million.

Silver Key Senior Services, for example, turned the $12,000 it received from last season's fundraiser into 638 rides and more than 2,000 meals for seniors, according to an after-action report submitted by the organization.

That money also allowed the nonprofit's staff to spend 180 hours reviewing seniors cases, with the goal of helping them live more independently.

Mercy's Gate, a nonprofit helping people who are homeless or impoverished, offered rental, medical or transportation assistance to 88 households.

For Ecumenical Social Ministries, the money received from the Empty Stocking Fund has routinely represented between 10 and 14 percent of the organization's annual budget.

It fills in funding gaps not covered by other grants - allowing it to continue offering vital services that keep more people from living on the streets, including rental assistance when people face eviction.

"This is a lifeblood for our organization," said Ann Lantz, the organization's executive director.

Donors will have a bit of help keeping that financial lifeline going this year.

And once again, every cent raised will go directly to the organizations, because the administrative costs of running the campaign are covered by Wells Fargo, ADD STAFF, the El Pomar Foundation, The Anschutz Foundation and The Gazette.

Roughly $80,000 is in the Empty Stocking Fund's coffers from donations earlier this year, and from events such as the All Colorado Beer Festival and a Signature Homes' golf tournament.

All of it is meant to ensure that the Empty Stocking Fund continues a three-decade tradition.

"It's a lot that we ask of the community, and they don't disappoint us," said Jerry Bruni, of the Bruni Foundation.