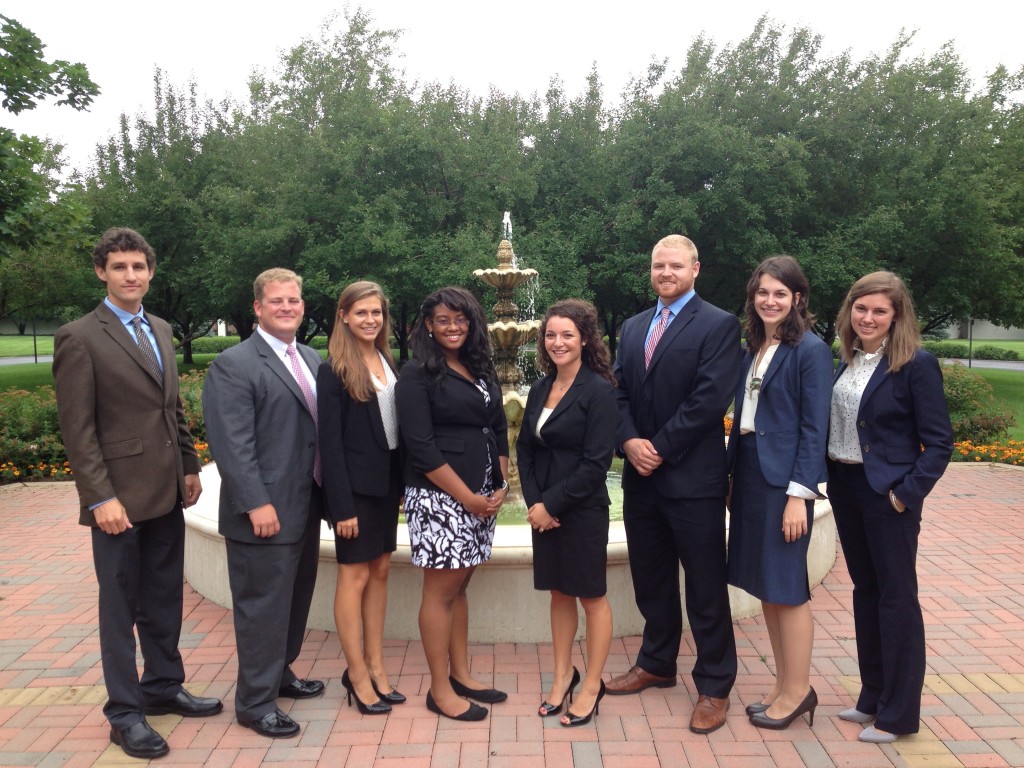 There is an excited buzz in the air at El Pomar Foundation today, as a new class of fellows begins their transition into two years of professional development, incredible opportunities, and the beginning of lifelong friendships. The class is made up of eight talented, dynamic and diverse young people who will bring new life and enthusiasm to the Fellowship.  We are excited to start this next chapter with them, confident that many great things lie ahead as this new class joins the El Pomar family.

Joanna French was born and raised in Denver, Colorado. After a childhood in the Rockies, she moved to Walla Walla, Washington to attend Whitman College. As a politics major, she explored her interests in ethnography, sustainable development, and social and environmental justice. When she returned to Denver for several months in 2011, Joanna  co-directed and edited an independent documentary on homelessness in Denver, subsequently sparking an interest for the diverse communities of Colorado. After graduation in May 2012, she interned for the African Community Center Refugee Resettlement Program and volunteered for Denver Urban Gardens, until moving to Bolivia to work as an English teacher at a small university for eight months. In her free time, she loves rock climbing, backpacking, and playing classical piano.

Though she was born in Flint, Michigan Ashley Cornelius moved to Colorado Springs when she was three years old and has lived in Colorado ever since. Following her graduation from the International Baccalaureate program at Rampart High School, Ashely attended the University of Colorado, Colorado Springs where she double majored in psychology and communications. While at UCCS, she participated in the UCCS honors program, worked as a Student Ambassador, a tutored on campus at the Communications Center, and won Miss UCCS during her junior year.  In addition, Ashley also served as vice president of the Black Student Union and held five leadership positions within her sorority, Phi Sigma Sigma, completing her role there as vice president.  While attending UCCS, Ashley interned with KOAA News 5. It is her goal to attain a master’s degree in communication and a PhD in psychology.

Cecelia Crossen was born and raised in Denver, Colorado. She graduated from Colorado College in May 2013 where she majored in international political economy while simultaneously pursuing a rigorous pre-medical track. While at CC, Cecelia was actively involved both on campus and in the Colorado Springs community with memberships in four honor societies, serving as chapter president of her sorority, Kappa Alpha Theta, leading a mentoring group for at-risk youth in the Colorado Springs area, and working as a student athletic trainer with D-1 and D-3 teams a Colorado College. She also spent a semester abroad in Accra, Ghana where she worked in a hospital and explored her passions for medicine, people and travel. Cecelia enjoys yoga, cooking, and spending time outside with family and friends.

Colin McCarey was born and raised in Oak Park, Illinois.  He attended Colorado College and graduated in May of 2012 with a major in anthropology and minors in English and art history.  His courses at Colorado College took him to England, Spain, Italy and Nepal.  Colin’s greatest passion, however, is community service.  Colin managed the Colorado College Community Kitchen for three years, serving the homeless population of Colorado Springs on a weekly basis.  During college, he also regularly led volunteer groups to work with nonprofit organizations throughout the American Southwest.  Colin loves hiking, cooking and playing board games in his spare time.

Beau Kelly was born and raised in Colorado Springs, Colorado. He graduated from Doherty High School before heading to the Midwest to continue his baseball career. Beau attended Nebraska Wesleyan University in Lincoln, Nebraska where he majored in business administration and history. He spent the fall semester of his senior year in Washington, D.C. working with the Batter-Up Foundation. At the Foundation, Beau helped develop a program to prepare inner-city baseball players and their families for collegiate baseball. He is excited to be back in the mountains serving his hometown and El Pomar Foundation.

Kalen Acquisto, a native Coloradan, graduated from Denver East High School. With her love for the Rocky Mountain region, she kept close ties to the state by pursuing her diverse interests at Colorado College. She earned a bachelor of arts degree in anthropology with an international affairs concentration and a minor in Spanish. Kalen has had the opportunity to study abroad multiple times and these experiences have given her an acute appreciation for cultural diversity. Kalen worked as a Fellow in the Colorado College Office of Admission, and interned with local businesses and non-profits while at CC. In her spare time, Kalen can be found adventuring in the outdoors, crafting jewelry, writing, running and swimming. With her passion for local issues and her full investment in Colorado’s broader community, Kalen embraces the opportunity to serve as an El Pomar Fellow.

Zoe Goodman hails from Boulder, Colorado, but moved with her family to Evanston, Illinois in high school. She graduated with a major in social policy and a certificate in leadership from Northwestern University's School of Education and Social Policy in 2013. During her time at Northwestern, Zoe studied abroad in Hyderabad, India. She also served for three years as Willie the Wildcat, Northwestern University's mascot. Zoe loves Bollywood movies and the Chicago Cubs.

Matt Weigel was born and raised in Cincinnati, Ohio and graduated from the Cincinnati Country Day School where he was captain of the football and lacrosse teams. Following high school, Matt attended the University of Colorado, Boulder. During his four years, Matt discovered a passion for government, leading him to major in political science. In the spring of 2012, he traveled to Washington, DC to intern in the Capitol Hill office of US Senator Rob Portman. He returned to Boulder to complete his studies and obtain his degree. Matt’s parents are both CU alumni and his younger sister is a sophomore there. This past winter, Matt returned to Washington to intern for U.S. Representative Brad Wenstrup, the newly elected congressman from Matt’s home district. Matt’s love for Colorado and interest in public service have now brought him back to the mountains. He looks forward to giving back to his home away from home during his tenure with El Pomar Foundation.