Don’t Judge a Book by its Cover

We live in a world of stereotypes and generalizations. The second we meet someone we make a judgment. We think: “You look like this so you must be this kind of person,” or, “you are from a certain part of the world so you must act a certain way.”

To be completely honest, when I heard that I had an opportunity to work on an American Council for Young Political Leaders (ACYPL) delegation from India and Pakistan I made some immediate generalizations.  Yet these generalizations were quickly disproven.

Based on what our media and politicians relay to us about the Middle East and adjoining regions, thoughts of massive oil reserves, depressed women’s rights, anti-American sentiments, and, yes, terrorism crossed my mind. A story last week on CNN, from Syria highlights Americans’ worst fears:

"I've fired this gun about 2,000 times," said Jamal Awar, a bus driver-turned-rebel. He said that, during his mandatory military service, he specialized in firing the seated, double-barreled, anti-aircraft gun. Awar said that expertise helped him shoot down a helicopter during a battle in the nearby town of Azaz several weeks ago. “I was ecstatic, I was very happy," Awar said.

We seldom hear stories of peace, prosperity, or progress from this part of the world, and after my recent ACYPL experience, I would like to say that is a shame.

Last week, I met a group of ten political leaders – five from India and five from Pakistan – and had the opportunity to play host in Colorado for five days.

The politicians were involved in a wide spectrum of activities in their respective countries. Their involvement with issues at home added insight and a great dynamic to the meetings we planned up for them. 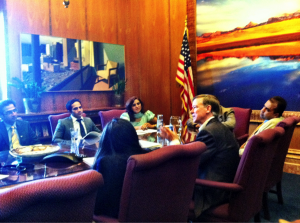 Our five-day agenda included meetings with youth advocates, college deans, international experts, political advisors, court judges, and government officials. The delegates also had an opportunity to meet Colorado Governor John Hickenlooper and Colorado Springs Mayor Steve Bach.  We also had the opportunity to introduce them to Colorado culture as we visited several museums and even attended a Rockies Game.

However, it was outside the structured meetings where I really learned about who these people were. They all were passionate, considerate, and involved citizens who were civically engaged in their communities and cared deeply about not only their home countries but also the world at-large.

I saw the delegates’ compassion in action in the days following the tragic Aurora movie theatre shooting. Najiullah Khattak, a district vice president of the Pakistan Tehreek-e-Insaf party, emailed us to say, “I am deeply shocked and grieved over this incident and I can feel for the families of those affected. Please convey my condolences to all the people we met in Colorado and I will write to them personally when I return home.”

During the delegation my previous conceptions drifted away. The delegation taught me not to make snap judgments.