Over the last 105 years, the 1909 schoolhouse that stands just outside of downtown Breckenridge has seen many changes. In 2013, El Pomar Foundation awarded the Town of Breckenridge $40,000 through two different grants, including a High Country Regional Council grant, to support the $8.8 million project to restore and re-purpose the old schoolhouse into a new library and community center. Renamed the Breckenridge Grand Vacation Center, the building opened earlier in January. 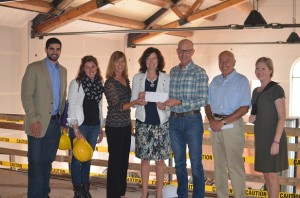 The space will serve as the new headquarters for the South Branch of the Summit County Libraries. In tandem with the library, the schoolhouse will offer up to 3,000 square feet of community meeting space that can be used as a conference center for the public and non-profit organizations, as well as an archive room for the Breckenridge Heritage Alliance and a movie theater with a concessions area designed to look like an old speakeasy.

Anyone who has visited the schoolhouse during renovations can attest to the extensive preservation effort. The brick façade and the original wooden gym floors are just two of the parts that have been maintained to reflect the historic nature of the building. Anderson Hallas Architects, based in Golden, Colorado, was selected to redesign the building because of their expertise in restoring older buildings and their ability to create minimal environmental impact while maximizing functionality of the space. Thomas Davidson, Summit County Commissioner and former High Country Council member, is proud of the depth of the project and the way the architects have honored the heritage of the building. He notes that it will be a gathering place for the community for many years to come.