Battle at the Broadmoor

The hockey community in Colorado Springs had much to celebrate last week as head coaches from two premier college hockey programs faced-off, the Stanley Cup visited the Broadmoor World Arena, and the Colorado Avalanche took on the Los Angeles Kings.

The week commenced Tuesday afternoon when the head coach of the Air Force Academy, Frank Serratore, and the head coach at Colorado College, Mike Haviland, gathered at the Faceoff Luncheon with fans to discuss the upcoming collegiate hockey season. Both coaches discussed their teams’ preparation, expressed their excitement for the season’s start, and, of course, engaged in playful competition. As with any competition, both coaches lauded their own teams, but were primarily excited about the start of the college and professional hockey seasons.

Following the Faceoff Luncheon, hockey fanatics had the opportunity to take the ultimate holiday picture at ‘Sir Stanley in the Springs 2014’ when the Lord Stanley's Cup made a stop at the Broadmoor World Arena.  The iconic trophy visited the World Arena on Tuesday in preparation for the Battle at the Broadmoor preseason faceoff game.  The Stanley Cup lives an eventful life amid frequent public tours and days spent with each player on the championship team.  By the time the Stanley Cup arrived, hundreds of fans gathered to get the perfect photo with the legendary chalice.

The week concluded Thursday night as the Colorado Avalanche took on the defending champions, the Los Angeles Kings.  It was a fantastic game, ending in a shootout in which the Kings won 2-1.   Despite their team’s loss, Avalanche fans left invigorated by the fight against the Kings, the current top team in the nation. 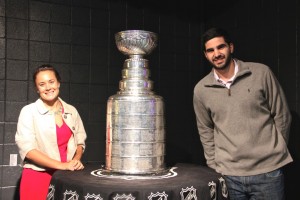