A Big Project for Big Animals at the Cheyenne Mountain Zoo 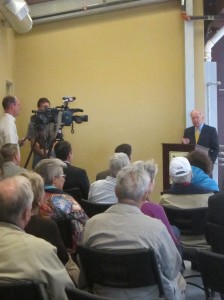 El Pomar Chairman and CEO William J. Hybl was on hand for a big announcement from the Cheyenne Mountain Zoo this morning. The zoo officially reached its $13.5 million fundraising goal for Encounter Africa, the zoo's biggest project ever. El Pomar Foundation contributed a total of $1.5 million to the effort, including $500,000 from the Ackerman Fund and $300,000 from the Hambrick Fund.

The press conference took place in the new Elephant Barn.  Hybl pointed out that El Pomar Foundation and the zoo share a long history, going back to Spencer Penrose, who created both organizations. The Foundation has made 136 grants to the zoo, totaling nearly $24 million. With the fundraising portion of the effort complete, construction will continue for several months. Cheyenne Mountain Zoo CEO Bob Chastain estimated an official grand opening of the exhibit will take place next spring.